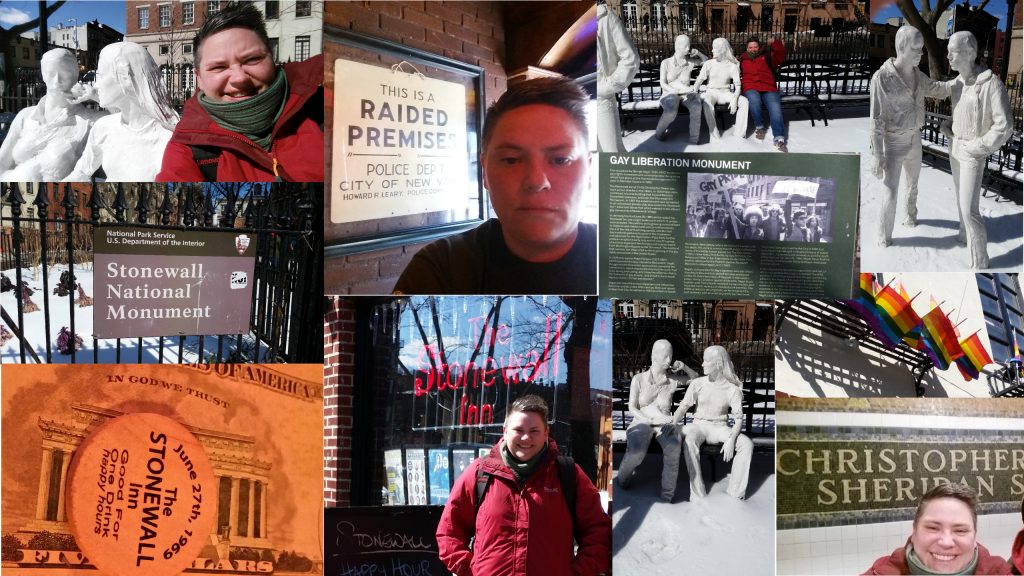 My wife (well not in the North of Ireland; only Civil Partner here) has always wanted to go to New York, her knowledge of America and American history is fantastic, I on the other hand like to learn about Irish and LGBT history. We started to plan our trip, to visit all the sites associated with New York such as the Statue of Liberty, Times Square, Brooklyn Bridge and the Empire State Building. All I know about the Empire State building was King Kong climbed it in the movie, I had no idea on the history of this building,  what happens in the building or why it is such a land mark; possibly because of the view you get from the top. On my list of places I wanted to visit was the Stonewall Inn. I did know the history of the Stonewall Inn, what happened in that building and how important it was for the LGBT community and the start of our revolution.

When I stepped of the subway on the platform at Cristopher Street I was so excited, I was eventually getting to see the place where people from my community rose up against discrimination, prejudices, bigotry and injustices back in 1968; the place where the revolution began. Outside of the Stonewall Inn there is the Stonewall National Monument. In the garden I sat on a bench and I thought about the people who were enjoying a night out in a bar, an unsafe place for people to socialise, because like many Gay bars police raids were common, but they went and for many their nights ended locked in a police cell. Except the night of 28th June 1968 when the LGBT community refused to accept the Status Quo of oppressions, no more would we be 2nd class citizens, the people fought back. The Stonewall Riots began; the revolution had begun and would continue all over the World.

On June 28th 1970 saw the first Gay Pride March to commemorate the Stonewall riots and today there are Pride marches all over the world, to celebrate the LGBT culture but these marches unfortunately still need to a platform for us to protest against the inequalities, injustices and discrimination against our community that are still happening here in the North of Ireland and many countries throughout the world.

I went into the Stonewall Inn and over my bottle of beer I reflected on my own life, growing up as a gay woman in the North of Ireland. Growing up seeing and hearing the derogatory language, comments, phrases and the blatant disregard some politicians, churches and individuals use and say about me and my community and the negative impact this has on our mental health and wellbeing.  Because of the language and actions of these people; so called leaders, people think it is ok to call use homophobic language, call us names, to attack us and refuse to serve us.

As a community we are fighting back, we are off our knees and we are talking with our feet.  The thousands of people who came out for the last Marriage Equality rally showed this and the thousands of people who will walk in the Pride Parades across the North of Ireland in August and September will demonstrate to those politicians, church leaders and individuals,  we are not 2nd class citizens we demand change and deserve to be treated like our sisters and brothers in the South of Ireland, in England, Scotland and Wales.

I am not condoning violence; I do not want my community to start a riot with pennies or stones, but an uprising; a revolution using our voices and our democratic right to vote. We all need to shout for equality, this can’t be left to just a few. People can’t sit back and say this has nothing to do with me because it has, it has to do with all of us and we all need to march together, stand united and shout as one…enough is enough we demand change, we demand equality and it needs to happen today.

The Rainbow Project has expressed its disappointment at the European Court of Human Rights decision on Lee v. the United Kingdom. The Court ruled today that because Convention Rights had not been invoked during previous hearings, that the application was inadmissible.