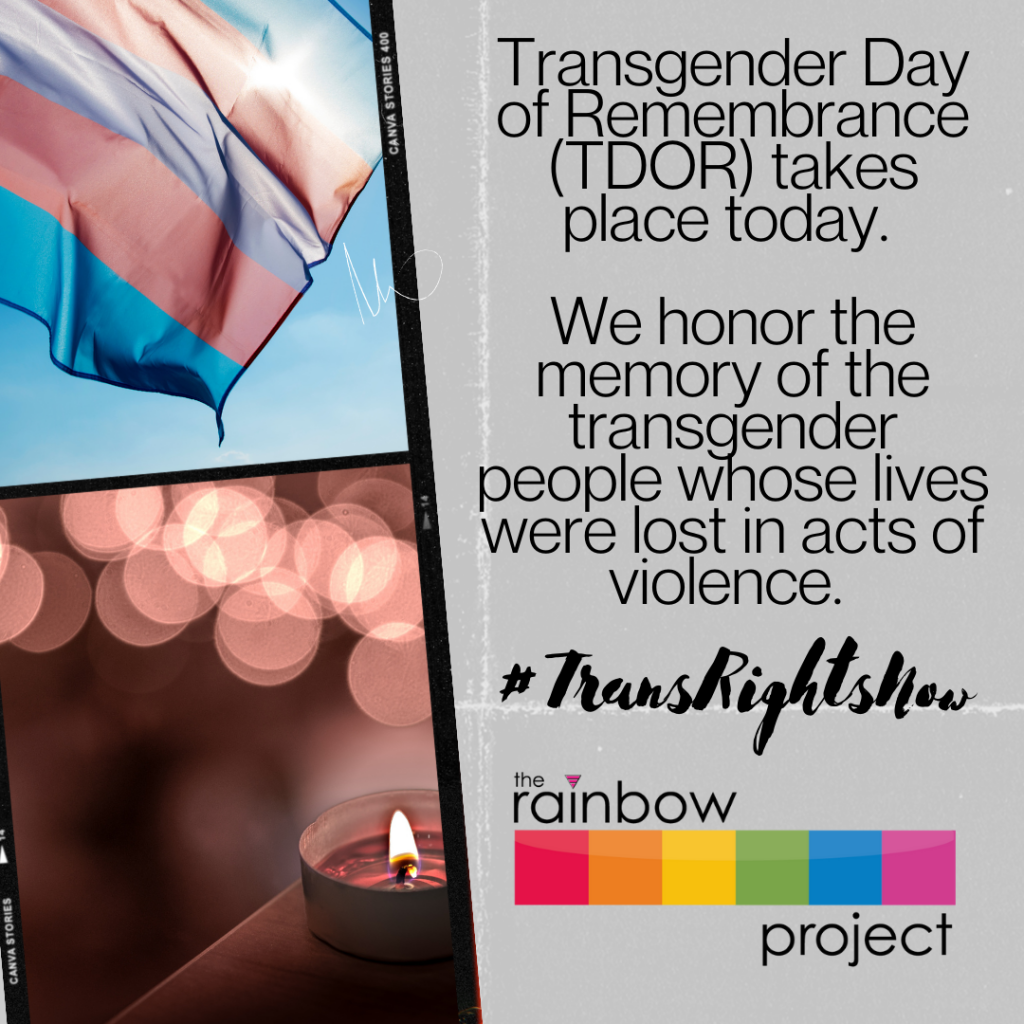 There is no better time to join the online vigils and events which are taking place to mark Transgender Day of Remembance.

Our Trans friends, family and colleagues are being confronted daily in UK media and online by an extremely vocal group of anti-trans campaigners. These people are armed with mistruths and stereotypes around the Trans community.  Unfortunately, media outlets are putting out this misinformation and repeating it even if others have pointed out issues with their coverage and content.

This type of media can be really upsetting for trans people. As they’re forced to see and hear their rights or simply their right to exist being debated, often in a negative context.

Are you ready for a challenge this Transgender Day of Remembrance?

Can you step up to be an ally for the Transgender community?

Trans people face transphobia from both outside the LGBTQIA+ community and within it. Therefore, we encourage everyone who is cis (not trans) and whether you are LGBQ+ or not to become a trans ally.

What is Transgender Awareness Week?

Transgender Awareness Week is a way to educate the wider community about transgender and gender non-conforming people and the issues associated with their transition or identity. People can share their stories, this helps to advance knowledge and advocacy around the issues of prejudice, discrimination and violence that happen to the transgender community.

The week is observed from 13th to 19 November, leading up to the Transgender Day of Remembrance (TDoR), which memorializes and honours those transgender people whose lives were lost in acts of Anti- transgender violence.

Transgender Day of Remembrance (TDOR) was founded by transgender advocate Gwendolyn Ann Smith as a vigil to honour her memory of Rita Hester, a transgender woman who was killed in 1998.

What does Transgender mean?

Transgender is commonly used to describe a person whose gender identity is not the same as the gender they were assigned at birth. Transgender can also include non-binary or gender non-conforming people who do not fall into the binary categories of man/woman or male/female. Non-binary people may feel they are not exclusively male or female and may embody elements of both. Some Non-Binary people identify as trans and others do not.

What is a Trans ally?

Here are some simple things you can do to equip yourself to be a trans ally and to help you feel more confident to speak up when you encounter transphobia.

What can YOU do to support the Trans community?

Listen to what the trans people in your community are saying. Make sure that in your work as an ally to putting trans people and their experiences forward, create spaces and opportunities for that.

A trans or non-binary person is the expert on their own experiences. Listen and trust them to know what they are talking about when it comes to their own gender.

If someone is questioning or exploring their gender identity, be patient with them, as this process can take time and they may wish to try out different names, pronouns, and gender expressions.

The best thing you can do to support any trans people in your life, or the trans community overall, is to educate yourself about what it means to be transgender and educate yourself on the issues they face.

Instead of asking a trans or non-binary person questions -educate yourself!

There is a wealth of resources online produced by the trans community which can help you and guide you about the issues that trans people face, the history of trans identities across the world.

Pronouns are the words that someone would like you to use when talking about them. We all have pronouns and use them every single day.

Some people prefer gender-neutral pronouns, like ‘they’, ‘them,’ and ‘theirs’. And there are some people who are still working out what their gender identity is and feel uncomfortable using any pronoun. Also, some people will use Neo pronouns like  Ze/Hir/Hirs or xe/xem/xyr.  If you’re not sure how to pronounce or use then just ask!

Here is a really handy way to try out pronouns and practice them –  https://pronouns.minus18.org.au/

Don’t be afraid to ask which pronoun a person would like to be referred by (if any) – and respect their answer! Also, if you make a mistake, simply apologise, correct yourself and move on.

Do not ask a trans or non-binary person what their “real” name (their deadname) is, and do not use their deadname if you know it.

Respect the name and pronouns they have asked you to use.

A person’s gender expression – i.e. their clothes, voice, mannerisms, or other aspects of their appearance may not always reflect their gender identity in the way you might expect. Also, Trans and Non-binary people do not all look a certain way, and you do not have to look a certain way to be a certain gender. Being Non-binary doesn’t mean you have to dress more androgynously.

Try to avoid assumptions about someone’s gender or whether they are trans based on their appearance, voice or characteristics. You cannot tell if a person is trans just by looking, so do not assume that there are no trans people present at a meeting or gathering.

If you hear the transphobic language, comments or jokes, call them out.  It’s not just banter or a joke.

What Rainbow does to support the Trans in Northern Ireland?

We work to support and advocate for the rights of trans people in NI.

We work for change, by working with the government, departments, stakeholders and other community sector partners to improve policy and greater inclusion for trans people in NI.

We offer a range of services for the trans community in terms of Advocacy Support for Hate Crime, Housing, Sexual Health, Counselling. Additionally, we offer peer support through BeU project and by organising events such as Trans swimming sessions.

Questioning your own identity? Want to speak to someone?

If you’re currently questioning your own gender identity and think you might like to chat with someone other than your friends or family – then our team are always here to listen and offer practical help and advice.