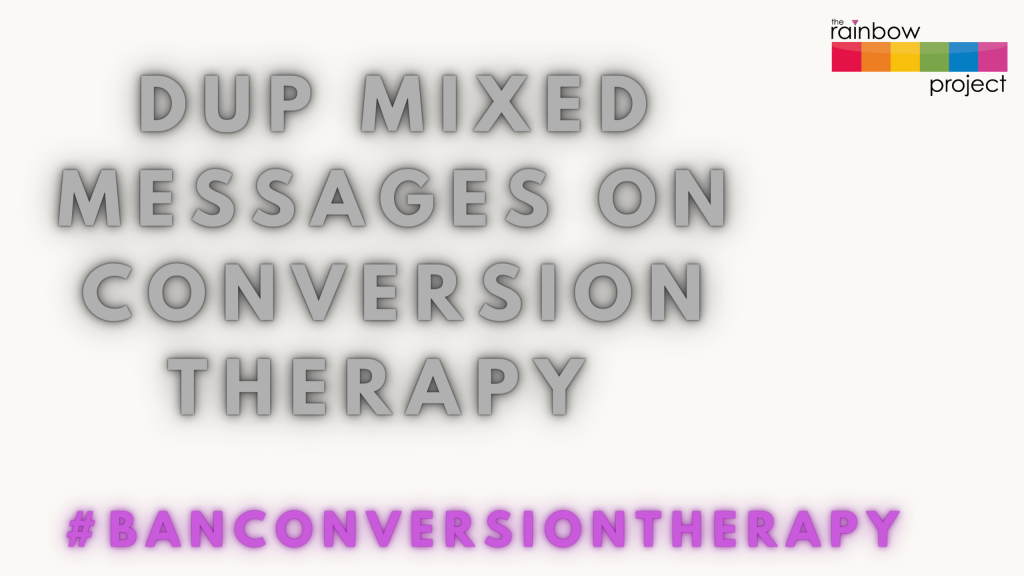 The Rainbow Project, the organisation supporting the health and wellbeing of lesbian, gay, bisexual and/or transgender people and their families in Northern Ireland, has reacted to a recent letter issued by Mr Sammy Wilson MP to constituents who have contacted him around the current campaign to ban conversion therapy here in the UK.

John O’Doherty, Director of the Rainbow Project said “Mr. Wilson’s response is in direct opposition to his own party policy and one that his party colleague Pam Cameron repeated at recent Education Committee meeting. Which was that the DUP oppose Conversion Therapy.

Conversion therapy, reparative therapy, and all other so-called sexual orientation change efforts are rightly condemned by reputable mental health, counseling, and psychotherapy bodies around the world as unethical and harmful to the people who are subjected to these practices.

“His own party, the UK Government, The UN General Assembly, and over 400 global religious leaders have all called for an end to this cruel, degrading and inhuman practice.  Does Mr. Wilson believe that he simply knows better?

“The Rainbow Project will always stand against conversion therapy in whatever guise it presents itself and wherever it is being promoted. We call on LGBT+ people, our friends and allies to join the campaign to keep the UK Government and Northern Ireland ministers to their word on banning this practice.

“We urge everyone to act, write to your MPs and MLAs and sign the petitions calling for a ban conversion therapy in Northern Ireland. There is a handy tool on the website https://www.banconversiontherapy.com/which will email all MPs and MLAs in your local area to highlight your views. As Health is a devolved issue in Northern Ireland petition has been launched, specific to NI, calling on the Health Minister, Robin Swann, to legislate for a ban on this harmful practice. This petition can be found at  https://www.change.org/p/northern-ireland-assembly-ban-conversion-therapy-in-northern-ireland.

“LGBT+ people, including LGBT+ people of faith, are not broken. We would also appeal to anyone who has been through conversion therapy to contact The Rainbow Project, where we have a range of support services available.”