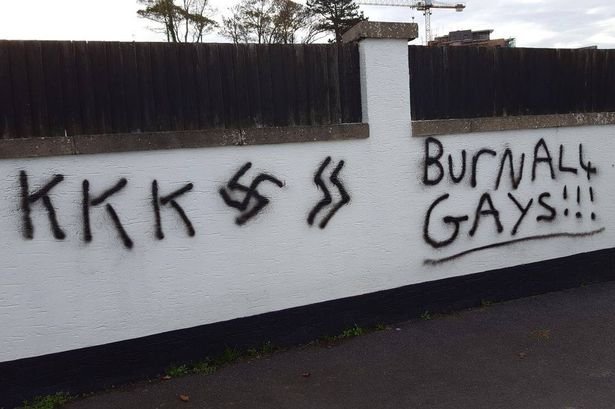 Anti LGB&T hate crime is unfortunately a reality for many within our community including physical assault, discrimination, verbal intimidation, vandalism, harassment and emotional abuse, not to mention the anti LGB&T rhetoric used on political and religious platforms.

The questions must then be posed; is this due to a culture of under-reporting from victims? Or is it the result of a positive shift in attitudes towards LGB&T people and, therefore, less hate-motivated incidents. Research as recent as 2016 from Gallop tells us that an estimated 4 in 5 LGB&T people in the United Kingdom have experienced a hate crime and only a quarter of which have reported the matter to the Police. Under reporting remains a key issue in tackling anti LGB&T hate crime.

Even research undertaken prior to this (Rainbow Project, 2009) showed similar barriers to reporting specifically in Northern Ireland. 20% of LGB people reported being the victim of a homophobic hate crime or incident in the previous three years; and 64% of LGB people did not report homophobic crimes to the police.  Many victims do not report hate crimes or incidents for a number of factors which are not exclusive to one another, these include fear of not being taken seriously by the authorities, fear of reprisal from their attackers and fear of being outed to their friends and family as a result of reporting. Further themes of victims not reporting have included victims feeling embarrassment/shame, having to come out to strangers, no outcome/consequences for perpetrator and/or victim, further victimisation in the system or within their community or in some cases a combination of these reasons. Some victims have stated that they do not know what a hate crime is or that it is a reportable offense and therefore the idea of reporting it has never been a consideration to them.

In the past 13 months of working with victims of hate crime I have heard some truly terrible accounts of crimes committed against LGB&T people including; a 15 year old who was perceived to be gay by a group of school peers being physically assaulted and had his head stomped on; transgender women and men afraid to walk out of their door for fear of being attacked in the street; and the words ‘Fags Out’ anonymously spray-painted across front doors of the homes of LGB&T people taken by them as a warning that they are not welcome in their own communities. These examples provide some insight into some of the crimes committed against LGB&T people in Northern Ireland.

There has never been a better time to be Lesbian, Gay, Bisexual and/or Transgender in Northern Ireland; people in Northern Ireland are coming out younger, thousands turned up at Belfast Pride 2017 to demonstrate their support for our community, crowds lined the streets of the city to demand equal marriage for Northern Ireland, we have an ever increasingly visible community with a diverse and popular culture represented from everything to bars, clubs, our amazing drag scene, outburst, Queertopia and Outburst queer arts festival.

-So why are we still not reporting our attackers?

Are there accepted levels of prejudice?  Certainly a prevailing theme in non-reporting has been that victims have developed a high tolerance of ‘lower level’ incidents (vandalism, verbal abuse, harassment) and victims’ responses to non-reporting include ‘I’ve been called that name since I was ten years old, it’s no different now’, ‘I’m used to it’, ‘it’s not a big deal’. Being LGB&T can mean that you have been subject to anti LGB&T hate for most of your life and certainly from starting school, therefore building resilience to them is part of surviving in these environments However, it certainly does not mean we have to be tolerant of it in today’s society.

The only way to respond to hate is it call it out, it means calling out your family, friends, peers or colleagues when they use harmful language or behaviour. It also it means using the structures and laws available to us, which were hard won, against those who have harmed us, emotionally and physically. The law is there to protect us and we should have the confidence to exercise our rights and to be protected.

Hate crimes can happen in schools, in the street, at home and at work, they can occur in all parts of Belfast and all regions in Northern Ireland.  It is therefore vital that the LGB&T community know their rights from an early age and that there are legal measures in place to safeguard them as a protected minority. It is all of our responsibilities including schools, police and all public bodies to equip our community with the information, confidence and support to address all forms of persecution towards our community.

It is unlikely that you will be the victim of a hate crime; however, I would encourage any person experiencing persecution as a result of their sexual orientation and/or gender identity to report it to the PSNI and if you don’t feel that you are able to, tell us!

Dan Peters is the LGB&T advocacy officer here at The Rainbow Project, if you or anyone you know has been the victim of a hate crime you can get support: https://www.rainbow-project.org/advocacy-worker