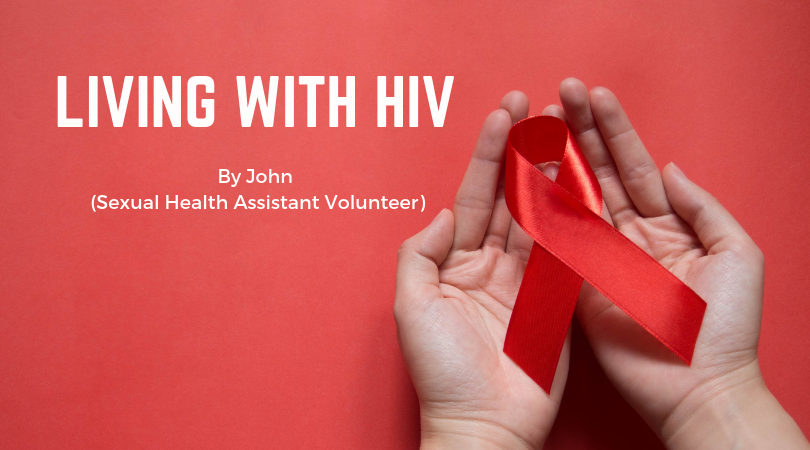 My name is John and I volunteer at The Rainbow Project for Leo, as the sexual health admin assistant.  As a person I am well organised and enjoy this role very much.  I’m quite a loud sort of person and I actively hold our MLA/MPs to account on my personal time.  I would class myself as an activist for all LGBT people and its always high on my agenda.  In my spare time as a gay man I have the obligatory cats!  I love the countryside and there is nothing better than walking along the beach listening to the waves.  I studied Marketing as a mature student and this helps me in my role at Rainbow Project.

I am HIV+ and I knew very little about HIV when I was diagnosed.  I believe as a teenager I saw adverts on TV, but they were dull, and I did not pay attention.  At the time I had a girlfriend and it probably never entered my head again until I was diagnosed.

When I was in secondary school Sexual Education (SE) was the laughing joke in our school.  As disruptive teenagers our aim was to embarrass the teachers!  If SE had focused on sexual health and specifically STIs (HIV included) I would have known more and would be able to make informed decisions about my sexual health.  This is in no way passing blame to anyone as I take full responsibility for all decision I have made in life.  If my school (back in the day) had SE provided by The Rainbow Project, my life would be so much different…. but that’s for another day.

Putting my thoughts down on my personal experience with HIV has brought back memories both good and bad.

Firstly, I had an amazing time on the LGBT scene throughout UK and Ireland and I lived for the moment. Money was good, parties were many and I was loving the music.

Life was going well, and I was working as a Regional Manager for a large multinational company. I had been sick with a cough and at times had problems with catching my breath. As I worked throughout UK and Ireland I never had time to address the issue. Eventually my body had a different idea and I was hospitalised while in Liverpool. I had to get biopsy after biopsy but with me not wanting to take anytime of work, I ignored it.

I continued to work but also began to feel sick. Not just bug type symptoms but really sick. I was back in Belfast working and attended City Hospital for some tests. The Consultant sat me down and asked about my sex life. I told him that I was gay, and he suggested a HIV Test. Now this HIV test was taken in a Respiratory Clinic. Perhaps it was me but there were 3 nurses round me and they were seemed just as scared as me.

Shortly after that I received a telephone call while driving from my consultant who told me I had HIV. I pulled the car over and just sat their contemplating life. I actually though I was going to die, and I was frightened of the next steps I had to take.

An appointment was made for me to attend the Royal Victoria Hospital, Belfast to get some support. Tests were done and alongside HIV there was a couple of STIs to add into the mix. I was told by my now HIV Consultant that I was HIV positive and it was important that I start medication immediately. Looking back and discussing with my consultant in real terms my CD4 count was just over 100.

I have found much Stigma having HIV, from a ‘prominent’ politician in Northern Ireland telling me it’s a “lifestyle choice”, dentists that would not treat me, to family members that disowned me.  I still to this day feel dirty and filthy on occasion and feel I am treated differently.  I’ve even had police officers that have passed my status on to a member of the public. Therefore I’m glad that The Rainbow Project now provide training for the PSNI so that humiliating mistakes such as this do not happen again.  The fact that there is no sexual health strategy for Northern Ireland means that young people are not empowered to make informed decisions about their sexual health – I am grateful that Rainbow Project can provide RSE for young people in youth clubs and community centres – but LGBT inclusive and comprehensive sexual health should be accessible to all!

I believe there is a direct link between stigma and one’s mental health.  I started binge drinking alcohol twice a week and was getting very depressed. I was seeing my life spiralling out of control. It all came to a head for me when I attempted to take my own life.  There is little or no services available for people with mental health concerns particularly for those in immediate crisis and this is something that’s needs urgently addressed! If it weren’t for charities like Rainbow Project that provide mental health support I don’t know how the NHS would cope.

Stigma in in our society, in my view, needs a lot of input from government right down to educating children and young people. The absence of a Sexual Health Strategy in Northern Ireland is having a negative impact on people throughout NI. This is something our MLA’s and Civil Servants need to address because education is key to prevention but also to early diagnosis for better treatment options.  We can openly talk about Diabetes, Cancer and other life changing diseases so why not HIV?

I’m now over 6 months alcohol free and that’s something I am proud of. I have a network of people to support me and I am happy to get the support! I’ve a family that support me and friends I can trust.  I personally believe that family are vital in supporting a HIV+ person’s health both physical and mental.  The initial shock within my family was massive, and for some members it took a long time to win round.

I thought I was going to die but I am glad to say with the help of RVH, Belfast and specifically (for me) Dr Say Quay. My viral load remains undetectable (which means I cannot pass on HIV to anyone else) and my CD4 count is for the first time over 400. I now take 1 tablet a day. But I fear for the future as austerity measures currently in place have put immense pressure on HIV services in NI.  Thankfully, we have amazing charities like The Rainbow Project and Positive Life and I have used the services of both.

Since volunteering with Rainbow Project (3 months now) my outlook on life is so much better.  I’m working in an environment that challenges me to be a better activist which I enjoy and honestly love.  I think it’s important for people with HIV to speak up and discuss with others.  We are not alone and together we can help to educate others so we can prevent the spread of HIV and also, create a world that is better for those of us living with HIV right now.

Bringing new diagnoses of HIV down to 0 is part of Rainbow Project’s campaign Steps to Zero which aims to do this by advocating for better education, testing, support and challenging the stigma surrounding HIV & AIDS.

The Rainbow Project and HERe NI benefit from £260,000 funding boost