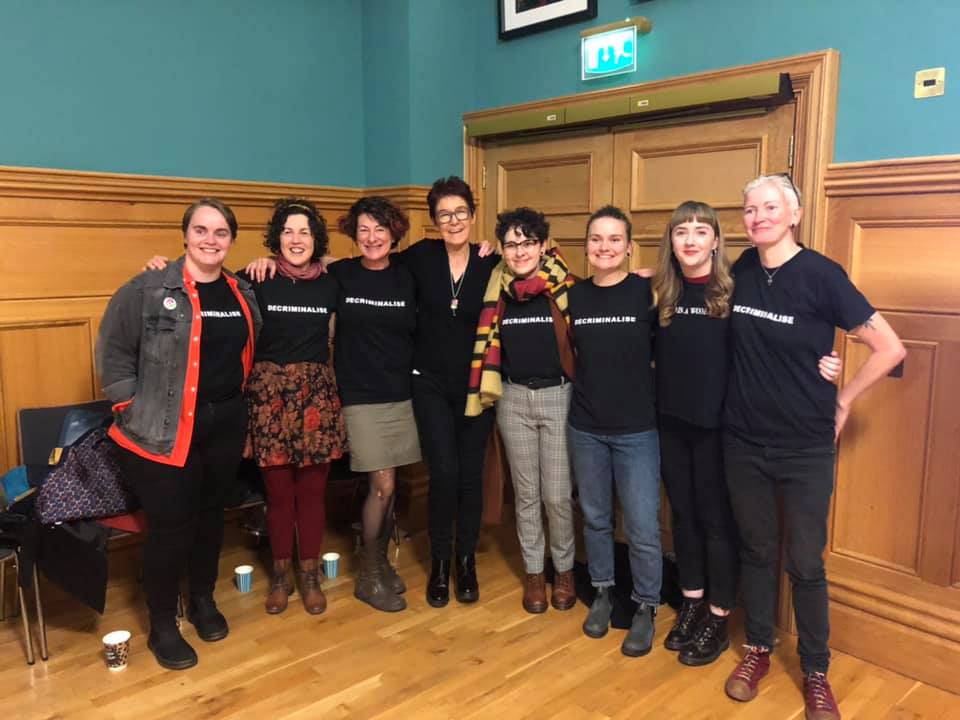 Eimear Willis is The Rainbow Project’s Health and Wellbeing Officer in the Western Area.

Heya, it’s Eimear here. I work with the adult groups in the Derry office. It’s Lesbian Visibility Week, and I wanted to take some time out to talk a bit about being a gay woman living in the North West as well as shout out some of my lesbian sheroes.

My earliest memory of being gay was on a football trip when I was around 6/7 years old. I told one of the older girls on the team that I thought another girl was pretty, which resulted in me being picked on by the older girls throughout the whole day. It meant nothing to me then, as I thought they were being a friend and joking with me but now looking back I can see that they were mocking me. In a funny turn of events, the girl I found attractive is now out and engaged to her partner – so my gaydar was pretty on point even if I was a wain.

I was never a feminine girl, always running with the boys and playing sports. I love the word tomboy. I had parents who were happy to let me wear what I wanted, and supported me in my sporting endeavours. I feel like I was giving them clues that I was gay back then, especially when I walked around in nothing but tracksuit bottoms and a white vest rapping 50 Cent songs.

I went to an all-girl Catholic secondary school, where a skirt was compulsory. Apart from the discomfort of having to wear this myself, my concern shifted to whether or not the other girls in my classes would be comfortable around me. While I wasn’t ‘out’, I didn’t hide my sexual orientation and I think everyone had a fair idea that I was gay. I spent most of my time at school risk assessing every situation to try and prevent anybody picking on me or making anybody dislike me. The ironic thing is that while I wasn’t bullied at school by other people, I sort of bullied myself in a way I would have expected from others. I put myself under pressure, took myself out of situations and even got changed in the toilets so people didn’t think I was looking at them in the changing rooms. Where did I learn that that was okay? I always felt like a bit of a weirdo.

When I was a teenager Tegan and Sara were my everything. I idolised them and their music, and had a mullet haircut like them for too many years. I also binge watched The L Word, frantically trying to learn the ways of Lesbian life and be prepared for the ‘real world’ when I left school. I pictured myself as some weird hybrid of Shane McCutcheon and Sara Quin – please tell me I’m not alone in this? As funny as that is, I didn’t realise how important it is to have positive role models. Aged 15 and with nobody local to look up to or turn to, I did what all queer teens did. I went to the local gay club – which was not the smartest idea ever, but I did meet some of my closest friends there. Shout out to Aine and Kerry.

I left school in 2012 and studied Music Production at college, working as a Theatre technician in The Playhouse. Through this, I got involved in Foyle Pride Festival in 2014. The organising committee reached out to me and asked for some advice regarding music for the festival, and after some back and forward I was putting together the music for the main stage. I was pretty chuffed with myself, having really looked up to this festival and the people who organised it for years. I was 18 and now considered these people friends.

The following year I joined the organising committee as co-chair and got to work alongside iconic women such as Sha Gillespie and Hillary McCollum. These are powerhouse women, who were so formative in me becoming comfortable in my lesbian identity. I struggled for a long time to identify as Lesbian or Gay, they never felt like they fit. But having strong role models, who are unapologetically queer, changed that for me. Hilary does some amazing historical work looking at Gay Women’s role in the Women’s Rights movement, which we highlighted during the huge centenary march ‘Processions’ in 2018. Sha is a lifelong activist and campaigner who basically taught me everything I know about activism and the Queer movement in Ireland. She’s also a dear friend, who I’d be lost without.

In 2016 we hosted JD Samson as our guest for the festival, and she played a blinding DJ set in The Glassworks. The teenager inside me nearly died when she played Deceptacon (Le Tigre) and joined us on the dance floor. We ate a Chinese together in the basement and had an amazing chat about what it means to be a ‘dyke’ in USA and Ireland. It’s one of the highlights of my life. It’s probably one of the low points of hers.

I still get so excited at seeing queer women on TV, in music, in the town. I love sharing the mutual ‘look’ or ‘nod of approval’ we give to each other out in the wild, showing each other solidarity. While it may not seem it, the dyke community in Derry is massive. The queer community in Derry is fragmented and a bit scattered, but it’s always the queer women who bring us all together.

Queer women are super heroes. We can bend gender roles and stereotypes, smash barriers and support each other. We’re the cool aunties and the loving mothers. We’re the brides in suits, and daddies in dresses.

Watching the queer women who I love, campaign tirelessly during the recent Marriage Equality and Abortion rights campaigns over the last few years has showed to me that queer women really do have it all within them. They highlighted that both of these issues are intersectional feminist and must be tackled by a united approach. 2 women in white dresses with their fists in the air – you can’t tell me that’s not a powerful image.

All these years later, I’m able to reflect and I’ve realised that I’m not a weirdo because I’m gay. I feel like a weirdo because I’m a weirdo. My friends are weirdo’s and we listen to weird music. We wear weird clothes and do weird things. I have a loving partner who’s a big weirdo, and we live in a weird wonky house. We’re all a bit unconventional but it’s not because we’re lesbians. If I could pass on any advice to younger people, it’s that. And that your weird bits are your best bits. Living outside the heteronormative structure allows us to embrace that.

We love labels in these parts. So, whether you’re a femme, butch, lipstick; or maybe you just like the word gay. Love your lesbian self this week. Love your lesbian friends, family members and sisters across the world. And if you haven’t told anyone yet, we’re here for you when you do. And a word of advice – skip season 6 of The L Word. It won’t do you any good.

I am a proud straight ally of the LGBTQ+ community. I want to help support the work of the Rainbow project in advocating for and