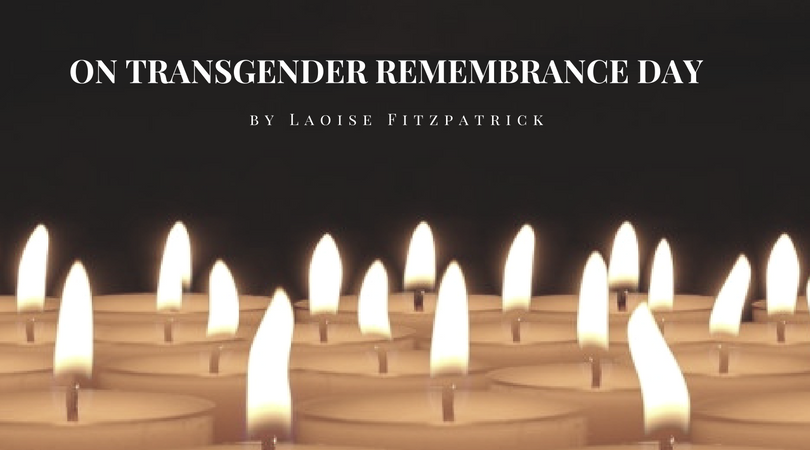 I vividly remember my first TDoR (Transgender Day of Remembrance). I had come out to myself as trans three or four months prior, and had told my parents, my partner, and a few close friends. I was still figuring things out, but the responses I had received were positive and caring, and many of my initial worries had been put to rest. I was invited by a member of my university’s LGBTQ+ society, who was the first trans person I had spoken to about my trans feelings, to come along and read a short poem – “Do Not Stand at My Grave and Weep” by Mary Elizabeth Frye. I agreed, and learned the poem in a couple of days, before going to the vigil on November 20th. I wasn’t sure what I was expecting, but the reality of the occasion hit me when the others in attendance began reading out a list of names – hundreds of them. All trans and gender diverse people who had been murdered due to transphobia in that year alone. It took a long time for them to finish, and I cried after, while reciting the poem. I’ve never felt the same about being trans again.

The vast majority of reported murders this year were in Central and South America, and the vast majority were sex workers and people of colour. Transphobia is a global issue, but to whitewash the reality of life for trans people living in the Global South would be doing them an injustice. The murder of trans people is an intersectional issue – it would be impossible to separate the issues of gender, race and class when discussing Trans Day of Remembrance. Trans women of colour are one of the most at-risk groups in society right now. Systemic and institutional transphobia and racism forces many of them into poverty, where they often turn to sex work as a means of survival. Sex workers already face a much higher risk of injury or death while working than the general public, and coupled with their trans status and race, they are often an easy target for transphobes and murderers. Their lives are seen as disposable and their deaths are under-reported. This is as true in Europe as it is in South America.

Do not let this fool you into thinking that trans deaths are only a problem elsewhere. Transphobia is a social disease, and it is evolving to suit its environment. Here in the UK, there are very few statistics on transphobia, trans hate crimes and trans deaths. While there are no reports of murders of trans people in the UK in the past year, according to TMM, this does not account for murders of closeted trans people, or those who take their own lives. Here in Northern Ireland, we recently lost one member of our community, a trans woman who was homeless. The intersection of class and gender is still at play here. In the past few weeks we have seen the UK media ramp up its anti-trans rhetoric. This may be a response to Westminster’s forthcoming Legal Gender Recognition review, which many trans activists hope will lead to a flexible self-declaration style gender recognition policy. The possibility of trans people being allowed to freely and easily receive legal recognition for who they are is anathema to the powerful and privileged in society. Anti-trans headlines will continue to dominate throughout the course of this review, at huge mental and emotional harm to already at-risk trans people. But more worrisome is what the response from the cisgender general public might be.

Transphobia is already institutionalised in our society, and those who appeal for “debate” about our lives are just as complicit in our deaths as those who harass, bully, and commit violence against trans people. As anti-trans rhetoric increases, so too must the voices of cisgender allies. It is not enough to sit back and quietly support any more. Our lives are threatened when trans people are allowed to be publicly dehumanised, and we need the vocal support of the ordinary citizen just as much as that of LGBTQ and human rights organisations. Write to politicians, complain when anti-trans headlines appear on national newspapers, stand up to your transphobic friends and colleagues, support and protect your trans friends and family. We have been fighting forever, and there aren’t enough of us to do it alone.

I love being trans. I’ve met the most interesting, insightful and compassionate people, and have had the opportunity to run events that give people a sense of community and hope. It isn’t always easy; I’ve lost friends, felt hopeless, and been rejected for who I am, but in my trans siblings I see self-awareness, empathy, and a hope and struggle for change that I have yet to see elsewhere. It angers and horrifies me that the lives that are so precious to me are so devalued by society, and it should anger you too. This Transgender Day of Remembrance, my friends and I will mourn 325 amazing lives that society deemed worthless. The following day we go back to fighting for rights, recognition and respect. Please be there to help us.