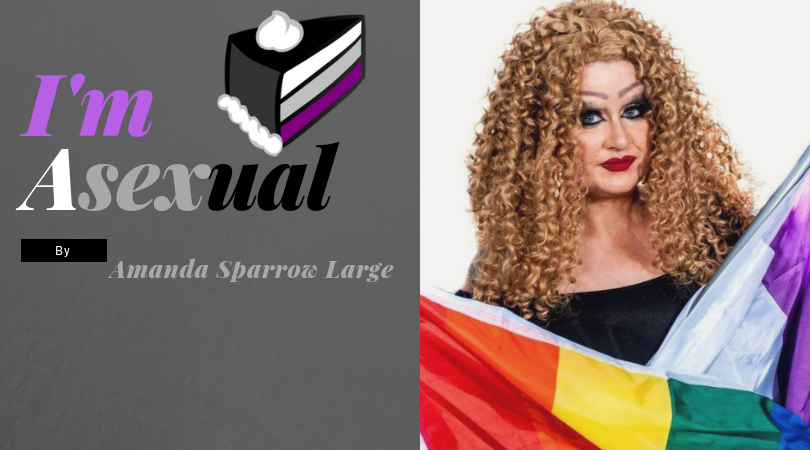 My name Is Amanda – I’m 46, an author, an activist, owner of an entertainment agency, an ordained minister, a mother, a grand-mother and I’m Asexual.

This may confuse you a little as it certainly has confused me!

I always knew from a young age I was “different”. I grew up in a small village in Ireland and sexuality was totally taboo, anything that was not heterosexual was never discussed or talked about. In High School we somewhat knew what a queer or a dyke was but it was only ever used as a slur or an insult. I remember our school was next to the boys and at lunch the girls would go over to the fence and chat up the boys and giggle about who they liked. I could not identify with this as I had no interest whatsoever. This led to me being ostracised and called a dyke. I wasn’t attracted to girls either. I put it down to “being a good girl” with a strict upbringing. However as this continued into my late teens I began to wonder what was wrong with me.

I had moved to England. I worked in the House Scene in Manchester and everyone was having sex but I just couldn’t bring myself to. I wanted to fit in so eventually I forced myself to have a relationship with a music producer. I would try to avoid sex and make excuses but society had led me to believe that to have a “valid” relationship sex needed to be a part of it. After a couple of years I got pregnant and he left me. After my first daughter was born I met Timothy whom I went on to marry. We were purely friends so I was very surprised when one day out of the blue he proposed. We had never even kissed. The reason I accepted was because it was still frowned upon to be a single mother and I wanted acceptance. He had a low sex drive but in the few times we had sex I did manage to produce two more daughters. Eventually we parted amicably. He called me “The Ice Queen” and I have been called that many times because my aversion to sex is misconstrued as coldness. After that I became close to a woman and did wonder if that had always been the problem that I may in fact be lesbian but having experimented discovered that the sex was still a massive block for me.

I remained single for years after that and I had my son who is seven by donor. It was only four years ago that I happened to be in Scotland and a gay friend suggested that I may be demi-sexual which I had never heard of. Demi-Sexuality is on the Asexual Spectrum. It means that there is no sexual attraction without an emotional connection being established first. I did identify with this but it did not explain that even when I was emotionally involved I still never desired sex, I never felt aroused or never masturbated. Long gone were the thoughts that it was my upbringing or that I was a good girl. I was a very open minded individual, did what I wanted, very comfortable with my body and certainly not a prude. How I felt was more inclined towards asexuality but I thought as I had been sexually active I could not identify as such.

I embarked on another relationship and there was an amazing connection but sex was still the thing I had to force and pretend to want, although I will admit that this was the closest I got to enjoying sex. Once it had been imitated it was somewhat pleasurable on a physical level but it always felt wrong. It felt like it was my body was just reacting to the stimuli but as a person I felt violated even though it was consensual and loving. Again it’s back to the validity it is supposed to bring to a relationship. Earlier this year I ended up in hospital and I almost died. That experience helped me realise that there would be no more pretending, no more compromising to please a partner or society; it was time I was true to myself so I came out as asexual. It was a huge relief. My partner and I are not still together.

To be asexual does not mean that you have never had a sexual experience, They are many different types of asexuality from those who have never been sexually active to those who are demi-sexual but it is still not well known, there is not a lot of information or education available and due to this it’s not always fully accepted as part of the LGBTQIA+ acronym. You may also hear asexuality referred to as ACE or Grey A.

Asexuality is not being frigid, celibate or a prude, it is not a choice, it’s an orientation. In the same way as you may find it hard to understand how one can never desire sex, someone who is asexual may have the same difficulty in understanding how sex is desirable.

In this modern world where sex is everywhere – in music videos, selling a product, attracting a mate, going clubbing, etc., in my opinion it makes it even harder to come out as asexual.

Sexual freedom is socially acceptable in a way it never has been before and that is as it should be but it should be acceptable also to be asexual without fear of mockery or judgement.

Imagine what a huge difference it would have made to my life if I had known I was asexual all those years ago. I am a strong independent and out spoken woman so if it took me this long I know there are many who will always live a lie. Let’s not carry this on into the next generation but educate, accept and let them know that it’s cool to be Gay, Straight, Lesbian, Trans, Ace or anything else that makes them happy.

P.S Remember that Asexuality Awareness week is October 22nd – 28th. Keep an eye out on The Rainbow Project website for more blog posts about asexuality and details about upcoming asexual workshops and/or events!

P.P.S Amanda runs a social space for all people on the asexuality spectrum. You can find it here.