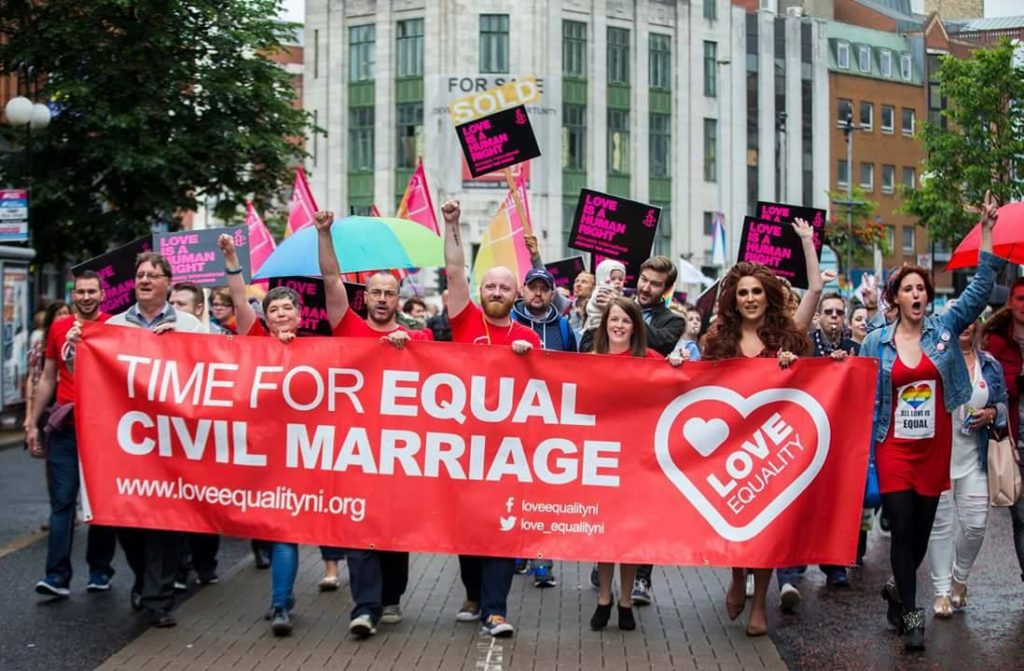 A commitment to deliver equal marriage must be a litmus test for any new Northern Ireland government, campaigners said today at a press conference in Belfast.

The campaigners, from the Love Equality coalition, the campaign for equal civil marriage in Northern Ireland, said that they believed there was now a clear majority of MLAs in the newly-elected Assembly in favour of equal marriage.

They called for a cross-party commitment to pass equal marriage legislation early in the new Assembly mandate, saying this should be a key litmus test for whether any new Executive was willing to be a “government for all the people” of Northern Ireland.

Clare Moore of the Irish Congress of Trade Unions (NIC-ICTU), the representative body for 34 trade unions with over 215,000 members across Northern Ireland, the largest civil society organisation in the region, said:

“Any new Executive must be willing to be a government for all the people of Northern Ireland. A key litmus test of this is whether it is willing to pass equal marriage legislation, as supported by an overwhelming majority of people and now also of Assembly members.

“The Love Equality campaign knows that a very significant majority of members of the new Assembly support equal marriage. The will of the people must be respected. That means there must be no more delay in delivering marriage equality.”

“All of the people of Northern Ireland must be served by the incoming government – that includes the LGBT community.

“Before any new Executive is formed, there must be a firm commitment to deliver equal marriage legislation. Without that, we know it will be another five years of LGBT people being treated as second-class citizens of Northern Ireland.

“Clearly, we think any new Executive should legislate for equal marriage. At a minimum, there must be a public commitment by any parties forming a new Executive that their members will not deploy a petition of concern to prevent a private members’ bill on equal marriage similar to laws which already exist in England, Wales, Scotland and the Republic of Ireland.”

Newtownabbey couple Diane Hope and Andrea Marks are engaged and want to be able to get married in Northern Ireland in the company of their families and friends. Andrea said:

“We want the same recognition and respect as any other couple out there. We are different, but then again so is everyone. That is not a reason to deny us equal rights under the law. Our love is just as important and valid as that of opposite-sex couples.”