Transgender people are people whose gender identity is different from the gender they were thought to be at birth. “Trans” is often used as shorthand for transgender. When we’re born, a doctor usually says that we’re male or female based on what our bodies look like. But for some people’s gender identity – their innate knowledge of who they are – is different from what was assigned to them when they were born. Most of these people describe themselves as transgender.

Non-binary is an umbrella term for people whose gender identity doesn’t sit comfortably with ‘man’ or ‘woman’. This can be someone who does not wholly identify with male or female regardless of the gender assigned at birth.  There are a variety of terms that people who aren’t entirely male or entirely female use to describe their gender identity, like non-binary or genderqueer.

Non-binary identities are varied and can include people who identify with some aspects of binary identities, while others reject them entirely. We exist within a society that only recognises that binary and reinforces that on a daily basis. This binary enforces that there only males & females are legally recognised genders – Mr. or Ms. (though Mx. exists) 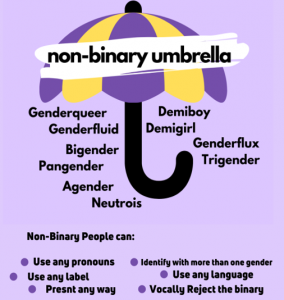 We gender everyone we meet as either male or female – regardless of their attempts to present androgynously.

How does someone know that they are transgender?

People can realize that they’re transgender at any age, our own research conducted in 2021 revealed that the majority knew around the ages of 14. Some people can trace their awareness back to their earlier memories – they just knew.

For many transgender people, recognizing who they are and deciding to start gender transition can take a lot of reflection. Transgender people risk social stigma, discrimination, and harassment when they tell other people who they really are. Loved ones, colleagues, classmates may not be that accepting, but they might be. But that fear can drive many trans people not to speak openly about how they are feeling. Again in our research people were waiting up to 4-5 years before they felt comfortable to tell someone else about their experiences around gender.

As transgender people become more visible in the media and in community life across the country, more transgender people are able to recognise themselves, put a name to their experiences and may feel safer and more comfortable sharing it with others.

Speaking your truth and being open about your gender identity, and living your life that feels truly authentic, can be a life-affirming and even life-saving decision.

What’s the difference between sexual orientation and gender identity?

Is being nonbinary the same as being transgender? Not exactly.

Being transgender is when you don’t identify with the gender you were assigned at birth.

Some Non-binary will not identify as Trans either and this can be for a number of reasons. Some don’t feel comfortable identifying as being trans if they’ve faced animosity from binary transgender people.

How many people in Northern Ireland identify as Tran or Non-Binary?