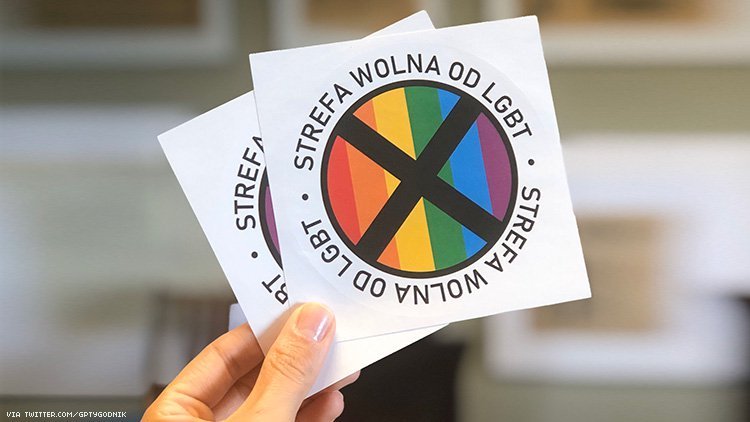 Across Northern Ireland, the past week has been a time of anticipation and celebration for LGBT+ people. After years of campaigning and building a public and political consensus, our community has succeeded in ensuring that marriage equality will be introduced by the Westminster Parliament.

In our preparations for the Belfast Pride parade next Saturday, many of us will be thinking about how we will celebrate this momentous step forward on our community’s journey towards equality of citizenship.

However, while we are right to be angry about how slow Northern Ireland is at adopting the progressive changes of our neighbouring jurisdictions, we must be mindful of the struggles that our LGBT+ family in many eastern European countries, and particularly Poland, are facing at the hands of governments, media outlets and far-right nationalist movements.

There is nothing unusual about right-wing political movements using LGBT+ people as scapegoats and Poland’s governing party, the Law and Justice Party, has pivoted from demonising migrants to demonising LGBT+ people by claiming that we undermine traditions (i.e. patriarchy) and ‘the family’ and children. These are standard tropes which have always been used to marginalise, dehumanise and terrorise LGBT+ people, or anyone who is perceived to be one of us.

More recently, a right-wing newspaper, supportive of the anti-LGBT government, has stated its intention to distribute ‘LGBT-free zone’ stickers in a blatant effort to strike fear into LGBT+ people and limit their ability to be visible and to participate fully in polish society. So retrograde was this action, that it prompted a rebuke from the US Ambassador to Poland, Georgette Mosbacher.

This vocal denigration and monstering of LGBT+ people is not without consequence. In societies which marginalise our community, our mental health suffers. When government’s collude in movements to mark LGBT+ people out as a threat, LGBT+ people are less open, even to their families, and rates of depression, self-harming behaviours and deaths by suicide will inevitably rise. Violent expressions of homophobia, biphobia and transphobia are, of course, more frequent.

This past weekend, anti-LGBT vigilantes attacked LGBT+ people and allies attending the first ever Pride March in the city of Bialystok. 25 people were arrested by police after LGBT+ people were beaten in the streets, pelted with rocks and glass bottles according to Pink News. In a statement, Polish LGBT+ group Mi?o?? nie wyklucza said:

LGBT+ people in Northern Ireland know only too well how we can be marked out as a threat to society. We are still living with the consequence of the ‘Save Ulster from Sodomy’ campaign started by the late Rev Ian Paisley and many of us can recite from memory the horrendous things which have been claimed about us by political and religious ‘leaders.’

It is our responsibility to stand with LGBT+ people oppressed by their states, to amplify their voices and use any power at our disposal to hold their leaders accountable for their failure to abide by the rule of law and ensure that our rights as European citizens are respected everywhere.

To this end, we are saying to the Polish Consul General Pawel Majewski and Polish Ambassador to the UK, Arkady Rzegocki, that we see what is happening in Poland and it is unacceptable and we call on them to explain what the Polish Government will do to ensure that the human rights of all Polish people will be respected and to declare and end to its hostility against its own LGBT+ citizens. Click here to add your name to this campaign.