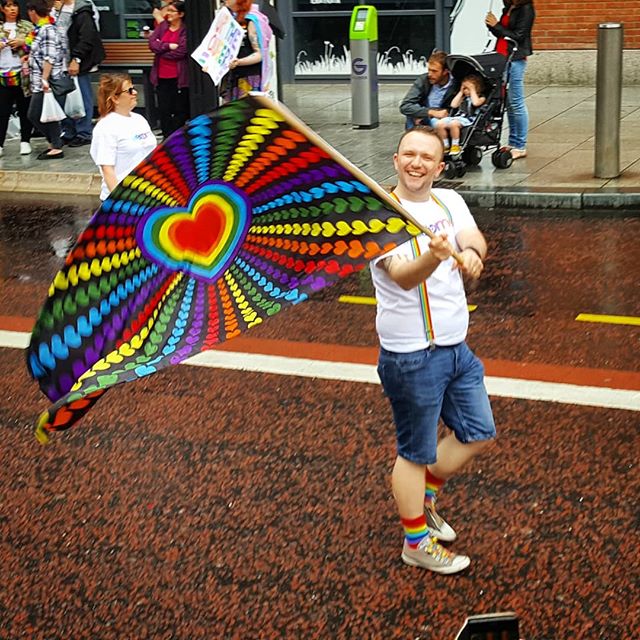 Stephen Donnan is an activist, writer and community worker in Belfast. You can follow them on twitter @Donnan_S

Coming out is never easy, even when it seems like it is. Today marks twelve years since I came out as gay to my family – it feels like a hundred years ago and just yesterday at the same time. The apprehension, the dread, the dramatic realisation that the wee thing you were always ashamed of and scared to talk to anyone about made sense when you finally kissed another guy. It’s both a recipe for success and has all the ingredients of a disaster waiting to happen.

I grew up in a predominantly religious household, with parents that went to church, adhered to the Bible as much as they could and put their faith in the knowledge that their sons would grow up to be men, act like men, marry women and have children of their own. I wasn’t one to follow the crowd, and I don’t know why my mum expected any different. Did she honestly think that the combination of me doing an Art GCSE, listening to Backstreet Boys, disliking football and never having a girlfriend all added up to straight? I kid, none of those things make you gay but those are the stereotypes we have to put with, aren’t they? Ponce, fruit, gayboy, faggot, queer, bender etc. The things that are shouted at you in the playground and you wonder why they cut so deep. You begin to wonder if they all know something about you that you wish you didn’t.

I remember that first kiss with another boy, the damning realisation that it wasn’t gross and it wasn’t disgusting and that it made sense. It was like watching a huge puzzle piece falling into place to complete the picture. Lying awake in bed and staring at the ceiling, hoping that if you pray hard enough maybe that feeling will go away. The insatiable desire to just be normal like everyone else. You can’t tell your mother or father because, of course, they won’t love you anymore and you’ll have no home to go back to. The lies about where I’m going, who I’m with and what I’m doing begin to pile up like bags of garbage – rotting in the corner and getting harder to ignore and avoid. Nights in Union Street, stolen moments with my first boyfriend in the cinema or the Pipeworks sauna become little tiny pinholes of light in an otherwise dark space inside my own head.

Eventually I summoned the courage to come out – in the most dramatic and on brand way possible – by writing a letter, leaving it on my parents’ bed, packing a bag and getting on a bus into the city centre with no idea of what would happen next. It didn’t take long for them to find the letter and then the phone call asking me to come home right away. That was possibly the longest bus ride I’ve ever been on, not knowing what was waiting for me. Without going too much into the pain of it all over again, I can only tell you that it wasn’t good. Tears, screaming, pointed fingers, awkward questions, judgement, rejection and condemnation from the people I loved more than anything in the world. Suggestions that I go to the doctor and get fixed, that it’s just a phase, that I’ve been hanging around with the wrong people and that I should speak to a psychiatrist etc.

I was in a very dark place for a long time. My own home became a battleground with my family, unable to talk to them about what I was going through because this was something I had ‘chosen’ and I had brought it on myself. The accusations and assumptions of why I had decided to become gay, why I had decided to go against God etc. Those words and actions hurt, and still hurt me. I have long since forgiven and reconciled with my parents about who I am and those days but for a while I was in a hole and couldn’t get out. I felt utterly alone and trapped in a place that didn’t love me or accept me for who I was and I decided, rather stupidly, to try and get out the only way I knew how. In November of 2008 I attempted to take my own life, and obviously failed, but it was clear to my family and I that whilst they couldn’t offer me the validation and support that I needed, maybe someone out there could.

It wasn’t long after that I was given a leaflet from my GP about The Rainbow Project and their counselling services. LGB&T people counselling LGB&T people in a space that was welcoming, validating and free of judgement. My counsellor was called Terry and that man helped me turn my life around and start to love myself. A huge part of the stigma about coming out is the internalised homophobia we have as queer people – we are raised to view queer people as other, as something to be gawked at and rejected, and that sits inside of us as a universally held truth so when you realise that you might belong to that part of society a little part of you turns that shame and rejection in against yourself. It’s an incredibly difficult thing to shake but that’s where it starts – with learning to love yourself and accepting who you are.

If it hadn’t been for the support and advice and mentorship I received from the wonderful staff and volunteers at The Rainbow Project I don’t even know if I would be here today. They absolutely saved my life, so it was a prophetic closing of a circle when I began working for them in 2016 and being able to give something back to the community that accepted me and saved me. I was incredibly fortunate to live so close to Belfast city centre, where help was only a short bus journey away. But there are hundreds, maybe thousands of kids who are in the same situation I was, unable to get support from their parents, their schools, their friends or their churches or GAA clubs. We have a responsibility now as queer people who have come out the other side of the tunnel to ensure that we advocate for greater services in rural areas, anti-bullying policies in every single school, making communities aware of their LGB&T neighbours and families so that one day we don’t have to come out at all.

I got to marry the love of my life last year, with my mum and family in attendance. William is welcomed as part of the family and he is a massive source of strength and support for me. My family have since apologised to me for what happened, and I have come to terms with the fact that they were simply coming to terms with the revelation that I was gay. I wasn’t loved any less, and things are exactly how they should be. I was lucky, and we need to be there for those that aren’t.

Queen’s ‘regret’ for conversion therapy is not enough; university must make amends