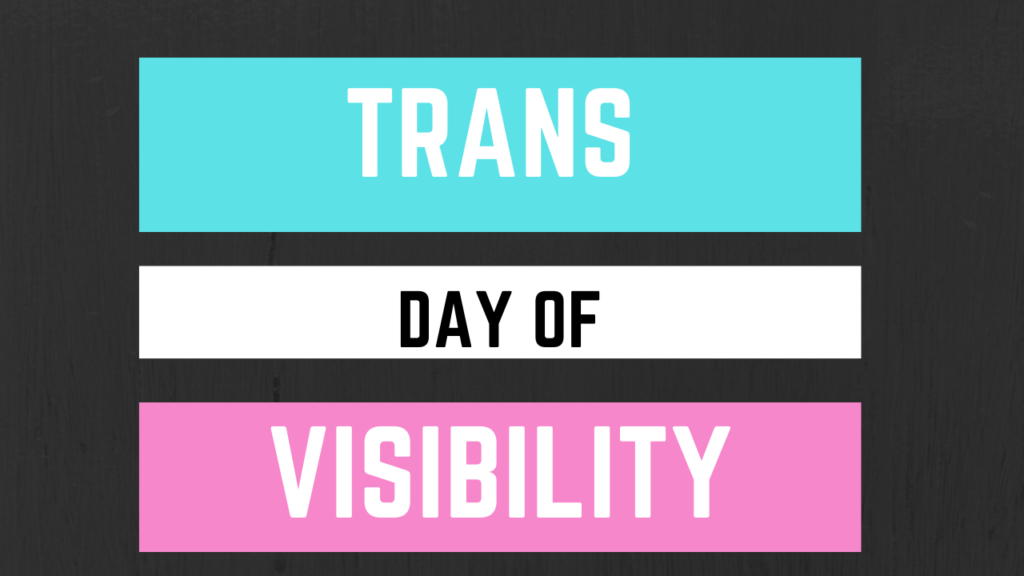 Why is visibility important?

Sometimes we need to be able to see something being done to know that it is also possible for ourselves. We all develop our sense of self in connection to the world around us. If the world reflects back to us positive examples of the type of person that we are or want to be, for example in the media, or in jobs we fancy ourselves doing, or in the types of relationships we feel we would like to have, then we can be safe in the knowledge that those things are possible for us too.

However, if what we are getting reflected back at us is not positive, or put limits on us or is even hostile, as has often been the case for trans people, then it can be harder to imagine that things are possible for us, at least not without a fight.

To me, seeing out trans people enjoying their lives, having relationships, working in jobs they enjoy, making art they love is important because it provides a blue print of possibilities that other people can hold themselves up against.

I would like to share just a few of those people who are or were out and visible as trans:

Lou Sullivan is regarded as the first out trans man who was also gay.  Up until the 1980s, when Sullivan began to share his story, the medical and psychiatric community, who were largely involved in health care for trans people,  believed that transgender men and women could only be ‘heterosexual’ (a belief which still persists in some circles). By choosing to come out, to advocate for himself as a gay trans man and to lobby the American Psychiatric Association, Lou helped shaped our understanding that sexuality and gender are two separate things. It also gave others who felt the same way as Lou, a blue print of possibilities

For those trans people who may have aspirations to act or be involved in TV, music or entertainment Mae Martin and Rebecca Root (who are out as non-binary and trans respectively) both have had mainstream TV slots on the BBC. And there is actress Laverne Cox who was the first trans person on the cover of TIME magazine.  For music there is Laura Jane Grace, who, in the only way fitting for a punk icon, came out to millions on the cover of Rolling Stone magazine. And there is Sam Smith who recently came out as non-binary.

Being able to imagine having the type of relationship or family you want can also be hugely important for some people. I am thankful to Freddie McConnell who documented his beautiful and emotional journey to becoming a father in the film Seahorse: The Dad Who Gave Birth.

And for those people interested in making change on a governmental level, Danica Roem, is an example of a trans women making headway in the world of American Politics.

I could go on…

All of these examples are of people in the public eye.  But visibility doesn’t need to be about being on TV and being known to the wider world. There are people closer to home, living ‘ordinary’ lives in my community that are just as important as positive role models, if not more so.

Being visible and telling our own stories, such as Freddie did in his documentary, also allows us to control our own narrative. As anyone who reads the tabloid media will know, the journalist and editors putting together these articles do not take care of trans people’s stories or lives. Media articles often focus on the sensational or negative in order to polarise and fuel misinformation and hostility towards the trans community. In telling our own stories, in our own ways, we can take back the power and counteract this harmful media narrative.

The importance of being seen can also be vital to the changing of attitudes and the advancement of rights. It shouldn’t be so, but often the burden of responsibility to educate others outside of the LGBT community on our lives and human rights falls to us as LGBT people. Being visible, and the patience, compassion and thick skin it sometimes takes to deal with what happens as a result of putting yourself out there is testament to the strength and resilience that exists in our community.

The power of possibility lies in the courage of others to forge the way.

An important caveat to all of this, is that being visible or coming out is always a personal choice. No one should feel like they have to come out or be visible if they do not want to. For some people, their circumstances may mean it is not safe to come out. Or they might just not want to, and living a quiet life is just as radical in my book as any other way of being. And then there are the complex politics of passing, of not having the choice of whether you are visible or not and of issues of harassment and discrimination, which many people face for being trans. And intersecting factors of race, class and disability all of which are part of a larger more nuanced conversation of all the ways it means to be trans.

On the original intent of Transgender Day of Visibility, being transgender can have it’s challenges and be incredibly difficult, but sometimes borne out of that struggle can be creativity, beauty, humour, resilience, determination and an ability to see the world with clarity and these are the voices that we amplify on a day like today.

If you have someone trans in your life, you are very lucky indeed.

LGBTQIA? Need Housing Support?– We can help you!