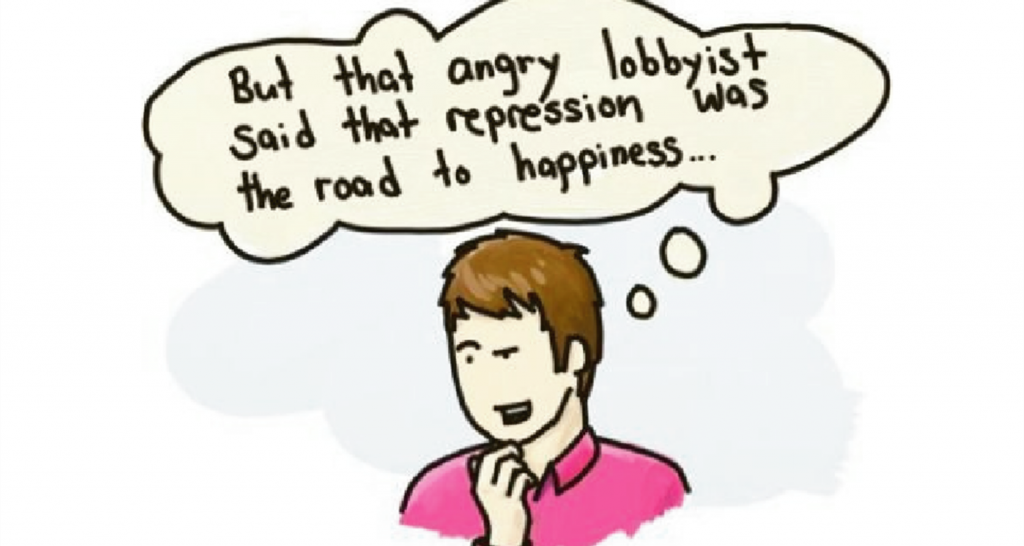 As we grow up we are taught the values of our society. In our homophobic, heterosexist, discriminatory culture, we may learn negative ideas about homosexuality and same-sex attraction. Like everyone else, LGB people may be socialised into thinking that being non-heterosexual is somehow “mad”, “bad”, “wrong” or “immoral”. This can lead to feelings of self-disgust and self-hatred. These feelings can lead to “internalised homophobia” also known as “internalised oppression”.

What is internalised homophobia?

Internalised homophobia and oppression happens to gay, lesbian and bisexual people, and even heterosexuals, who have learned and been taught that heterosexuality is the norm and “correct way to be”. Hearing and seeing negative depictions of LGB people can lead us to internalise, or take in, these negative messages. Some LGB people suffer from mental distress as a result.

Internalised homophobia manifests itself in varying ways that can be linked to mental health. Examples include:

01. Denial of your sexual orientation to yourself and others.

02. Attempts to alter or change your sexual your orientation.

03. Feeling you are never good enough.

07. Contempt for the more open or obvious members of the LGBT community.

08. Contempt for those at earlier stages of the coming out process.

11. Projection of prejudice onto another target group.

12. Becoming psychologically abused or abusive or remaining in an abusive relationship.

13. Attempts to pass as heterosexual, sometimes marrying someone of the other sex to gain social approval or in hope of ‘being cured’.

14. Increased fear and withdrawal from friend and relatives.

18. Clowning as a way of acting out society’s negative stereotypes.

20. Reluctance to be around or have concern for children for fear of being seen as a paedophile.

21. Conflicts with the law.

22. Unsafe sexual practices and other destructive risk-taking behaviours-including risk for HIV and other STIs.

23. Separating sex and love, or fear of intimacy. Sometimes low or lack of sexual drive or celibacy.

24. Substance abuse, including drink and drugs.

In their book, “Pink Therapy”, Davies & Neal (1996) illustrate some examples of how internalised homophobia and oppression may affect gay and bisexual men. Some of these examples include:

Fear of discovery:
where a person may try to hide his sexual orientation from family, friends, work colleagues, etc, by “passing” as straight. He may also “pass” to protect others, i.e. pretending that his partner with whom he lives with is “just a good mate”.

Discomfort with other gay people:
men who prefer not to socialise on the gay scene for fear that they will be seen going to/from those venues despite being comfortable going to gay bars when abroad on holiday, or the man who chooses not to speak to another gay man at work because “he is a bit camp and people may put two and two together”.

Short-term relationships:
an example could be the person who works long hours, has a hectic lifestyle, and when a partner wants to get to know you that bit more, you may decide that your life is too busy for a relationship and that you want to “keep things simple”.

Internalised homophobia and oppression can have a huge impact on your mental health, as well as influence your thoughts, feelings, and behaviours.

Davies & Neal believe that it is virtually impossible for any gay or bisexual man who has grown up in the UK or Ireland not to have internalised society’s negative messages about homosexuality.

If you would like to undertake some personal therapy to help you deal with internalised oppression, please see our counselling section for more information.

LGBTQIA? Need Housing Support?– We can help you!