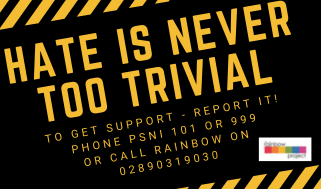 This week is Hate Crime Awareness Week, which is an annual campaign to raise awareness, encourage hate crime reporting, and inspire everyone in the community to work together to tackle hate crime.

I have been busy so far this week, speaking at an event hosted by the Police Service of Northern Ireland and Antrim & Newtownabbey Policing and Community Safety Partnership. The event included presentations and pictured below panel discussion from PSNI, The Rainbow Project, Victim Support NI, Leonard Cheshire NI and Migrant Centre NI.

This event included devised performance by students from Lagan College depicting typical hate crimes and incidents based on meetings that I had with them prior to the event. We are looking forward to working with the students to produce another performance for LGBT Awareness Week 2020.

What is a Hate Crime?

There are different types of hate crime recognized in Northern Ireland:

The advocacy service has been put in place to support victims who naturally and understandably are fearful of the consequences to themselves and the perpetrators of homophobic or transphobic hate incidents.

In 2018-2019, there have been 289 Homophobic incidents and 40 Transphobic incidents. There has been an increase in both categories but this doesn’t mean there is more crime happening to our community. It shows that more people are confident in reporting it to the PSNI or to a third party such as The Rainbow Project.

Whilst we want to reduce the incidence of these crimes, it is vital that we close the gap of under-reporting which according to our own research is around 64% of incidents.

Hate crime is currently under-reported, often because victims feel the incident to be too trivial or believe the police would not take the incident seriously or be unable to tackle it.

Hate is never too trivial -you will be listened to and believed.

What is a hate incident?

A hate incident is defined as any act which or may not be a crime where a person perceives it to be motivated by hostility or prejudice towards an aspect of a person’s identity (sexual orientation or gender identity). For example, you may have had abuse shouted at you on the street because you were holding hands with your partner.

How and where to report?

If you feel you have experienced a hate crime or incident, then you can report it. We can only do something if we know about it. If we don’t know, then we can’t prevent things from getting worse. By reporting a crime or an incident you could be protecting someone else from harm. There are a number of ways to report a hate crime or incident:

If you don’t want to speak to the Police, then call me directly at The Rainbow Project. I will talk through your options and support you in reporting to the PSNI or accessing support.

I urge you to report all incidents directly to the PSNI, so in an emergency call 999 or for non-emergencies then call 101.

Also, you can report all crimes anonymously through

There is no place for hate in Northern Ireland.

We want all victims of hate crime to know that they are not alone and that support is available immediately after an incident or at any stage.

Sports are for everyone