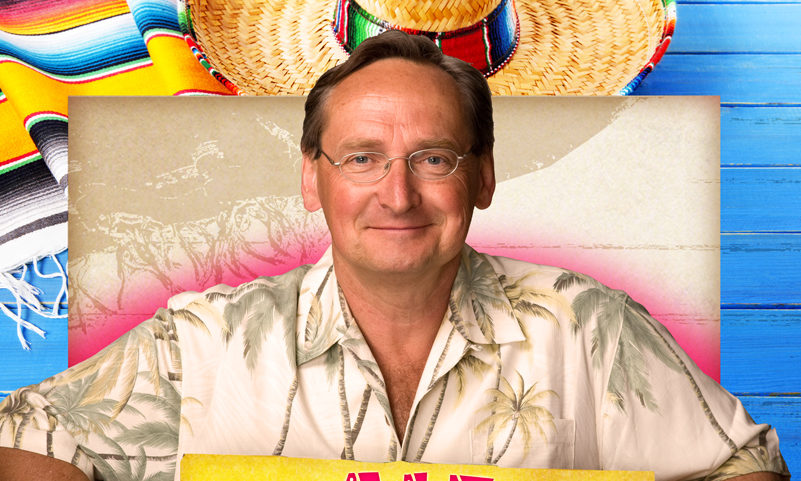 The Rainbow Project; a support and advocacy organisation for lesbian, gay, bisexual and/or transgender people and their families in Northern Ireland, have condemned a scheduled appearance of Polish writer and “comedian” Wojciech Cejrowski.

Wojciech Cejrowski is set to appear at Strand Arts Centre this Saturday the 15th September for a stand-up comedy performance which concerns stories about his travels in Mexico. However, Mr Cejrowski’s career has been built on inciting hatred and violence against those who identify as LGBT and making defamatory comments about Women’s rights and Islam.

Speaking ahead of the event John O’Doherty, Director of The Rainbow Project, has stated:

‘We spoke out originally in July when this event was announced, as this performer has a well-known history of making discriminatory and inflammatory comments through his content on YouTube and during his various television appearances.  This content is homophobic in nature with direct intent to incite exclusion and discrimination against members of the LGBT+ community.  His comments are also explicitly derogatory towards women claiming that their place is in the home and that they are inferior to men.   With regards to immigration, Cejrowski has also called for immigrants to be expelled from Poland.

“We hold close relations with Lambda Warszawa; a frontline LGBT organisation in Poland. This organisation provides legal, medical, sexual and psychological counselling to LGBT people in need. In addition to this, Lambda Warszawa monitors LGBT equality relating to persons living in Poland and is currently collecting data regarding discrimination on the grounds of sexual orientation. Since 2015 and the rise of the conservative Law and Justice (PiS) party, Poland has seen greater intimidation, discrimination and violence against the LGBT Community within Poland.

“There is absolutely no justification for someone being targeted because of their gender identity or sexual orientation. People of all races, religions, ethnicities, and sexual orientation or with any disability should be able to live their lives free from hate or harassment.  The views exhibited by Mr Cejrowski do not reflect the views of the Polish or the wider community here in Northern Ireland.  Furthermore we condemn the abuse which has been directed to our friends and colleagues from the Polish Community who have since spoken out against Mr Cejrowski. There is no place for hate speech in our community. Those who deny that the increase in anti-LGBT and other hate-crime incidents are a direct result of bigotry and use of highly abusive language are failing to acknowledge reality. I am urging our political and community representatives from East Belfast and across Belfast to speak out against this performance.”

Please see below, for comments from Mr Wojciech Cejrowski

“Rainbow flag is used by perverts”

„In our culture, two men snuggling on the street are disgusting and we do not want to watch it.”

„I would not want them [homosexuals] to feel safe, but to try to withdraw from this deviation by means of therapy.”

“Homophobia should grow in the nation.” [as a good thing]

“I encourage to discriminate against pederasts.”

[0:45-1:27] (Quoting Erdogan): “The closure of mosques is a step which will draw the world into a new religious war. Do you really think that we will remain idle while you do such things?” (Own commentary) This was a threat addressed to Europe. No, we do not think that you will remain idle because Islam is offensive and it reacts to such things in an aggressive way. That said, the religious war will not start now, in Austria. Islam waged a war on Christianity as far back as the days of Muhammad and inscribed it in the Quran. This war has merely been revived in our lifetime: bin Laden, then the Al-Qaeda, the Islamic State…And today, Erdogan is the leader of the new caliphate.

[1:35-1:54] Islam officially aims to assume control over the entire Europe. This is not a conspiracy theory, these are its explicit aims which are openly proclaimed in the mosques of Western Europe. Europe has now started, however torpidly, to defend itself, for instance in Austria.

[2:01-2:12] (On the “one million of Islamic refugees” in Germany) Most of them do not want to work or educate themselves. Why? Because Islam’s is a culture of conquest, not of work and production. They did not come here to work.

[2:17-2:41] The Arab is eager to engage in trade – now that’s noble occupation – not to work by the sweat of his brow. It was Arabs who led the slave trade in Africa. They would conquer and subjugate the slaves, and forced them to do their work for them. We Christians represent the work ethos, whereas they – meaning Islam – are a culture of armed conquest. It’s what they are and always have been.

[2:51-3:37] The immigrants did not come to Europe to work, our values are of no interest to them. What they are interested in is conquering our territory, picking up the spoils, and sending the slaves out to work. That is why 85% of refugees prefer to claim social benefits which are paid for by the enslaved Germans. The latter toil while the former sit and claim them. How do we deal with a culture like that? We must repulse it from our territory, as Austria is doing. We must create obstacles for them. You want to build a new mosque in our country? Please build one church in Saudi Arabia first. The religious war is not about to break out: It is already under way, and it has been for along time. And we must not treat those who invade us with kid gloves, because they have no intention of treating us with kid gloves.

(Citing Cejrowski’s response to members of the Campaign Against Homophobia, a Polish LGBT organization, who offered him a Teletubby toy and a lollipop) “I don’t accept gifts from faggots, I won’t take it. You disgust me. These things might be ridden with HIV. The sin of Sodom must be condemned.”

(Citing Cejrowski’s 2009 speech at the Catholic University of Lublin) “A pederast evokes disgust in a healthy man. But he also evokes disgust in the eyes of God. And it is our duty to point fingers at them, if this should save their immortal soul from damnation.”

(Citing Cejrowski demonstrating a pink fishhook in a travel segment) “This one’s pink and small, probably made for faggots.”

On Men and Women https://www.youtube.com/watch?v=-9E2mr3SQCs&app=desktop

[0:07-0:35] We differ physically and physiologically, we have different brains which work differently. Let us therefore recognize the fact that we are somewhat different animals. And so, it follows from the above that the man is better-equipped than the woman — the ladies are already upset, that was my intention — to do certain things, while the woman is better than the man in other things.

[0:59-2:00] No culture can change our biology. 10,000 years of culture which has made women put on trousers, flight fighter jets, and so forth…We can change anything we please in our culture, but it will remain unchanged in nature. Since the moment we climbed down from trees, the man remains a hunter. He leaves his home, he leaves his nest, and goes hunting. He is more active outside — that’s what he’s made for — whereas he’s doing a bit worse in the nest. He returns to the nest to rest, sit down, browse TV channels. He deactivates in the nest because he’s done his thing outside. And the woman? The woman is a nest dweller. This is her home situation, she feels the most comfortable here. And in company, she likes being surrounded by chatter, that’s what her head, her feelings, her entire physiology are accustomed to. If she doesn’t have enough children, she will get some more lady friends instead of children, she will get cats instead of children because she is building a nest.

[2:04-2:20] Are these differences already apparent when we’re little? They are, that is why it’s good to send girls to a girls’ school and boys to a boys’ school, because the same mathematical curriculum is taught differently to boys and to girls.

[0:20-0:29] In our culture, two men making out in the street is considered disgusting and we do not want to see this. They can do it at home.

[1:19-1:33] I would like to find a way of prompting society to cure alcoholics of alcoholism — and we are promoting this sort of treatment in the public media — to cure drug addicts of drug addiction, and to cure pederasts of their sodomy.

[3:43-4:01] (Commenting on a children’s book about two male penguins who raise a hatchling together) Sodomy in any form should not be recommended or promoted. If this book has been written in the belief that we would fight homophobia in this way, then I say no. Homophobia should increase among people. We should be afraid of alcoholism, drug addiction, sodomy, and other deviations.

[7:28-7:42] The word “phobia” means “anxiety” or “fear.” Yes, I do fear that homosexuality will unleash in an ever-wider wave and seize more and more social groups, hoodwinked by the slogan that this is one of the three available options.

[8:49-8:57] (Speaking to another studio guest, an LGBT advocate) You would like to limit the rights of certain people, such as the rights of homophobes [points at himself]. You are opposed to this, so I am allowed to be opposed to pederasts.

[9:03-9:23] (Commenting on the prospects for introducing same-sex civil unions in Poland) Regrettably, I know that this will happen. Therefore, for the sake of my family, I am gradually moving all my things to a country where no such thing will happen for a long time, and where I will be able to die before it does. In Poland, on the other hand, I will fight this with all the means at my disposal and pray that this doesn’t happen.