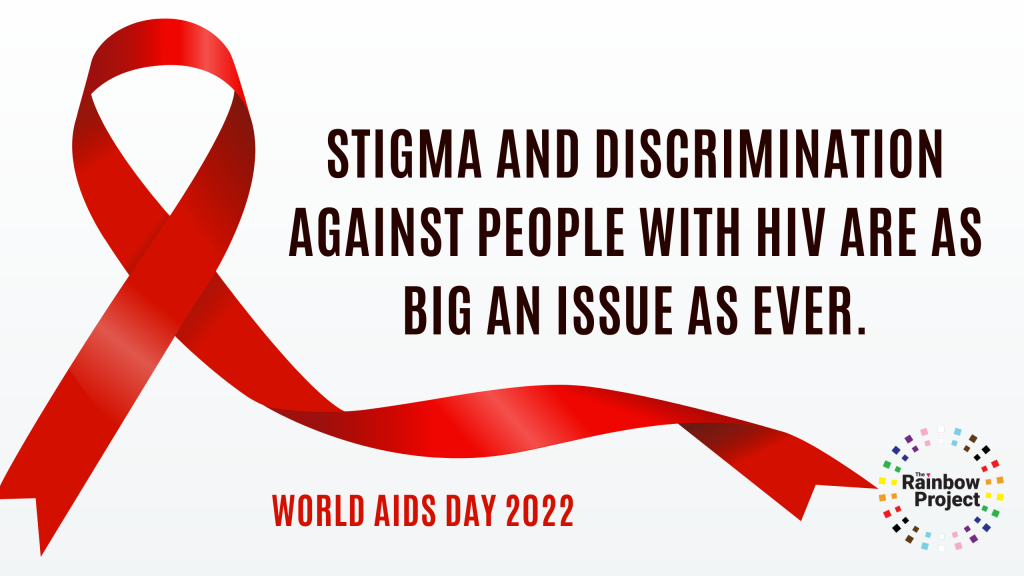 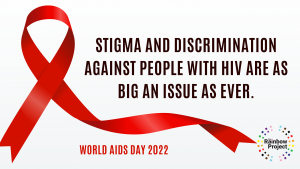 World AIDS Day, designated on 1 December every year since 1988, is an international day dedicated to raising awareness of the AIDS pandemic caused by the spread of HIV infection and mourning those who have died of the disease. But unfortunately, the stigma and discrimination against people living with HIV are as big an issue as ever.

Speaking on the importance of World Aids Day Director of The Rainbow Project John O’Doherty said “It’s been over forty years since the emergence of HIV, and we’ve seen incredible developments in the treatment and prevention of the virus. Unfortunately, stigma remains one of the most difficult challenges for those living with HIV today. Stigma can take many forms such as hostility, aggression, and exclusion. People living with HIV can experience this in different areas of their lives, from their relationships, service providers and unfortunately still in healthcare provision.

“With substantial developments in testing and treatment people living with HIV can expect to live a full, healthy, and happy life. Today people with HIV have the same life expectancy as those who are HIV-negative. However, many people living with HIV feel isolated alongside a need to conceal their HIV status due to fear of stigma and discrimination. Many of the myths about how HIV is transmitted still exist today and we must do more to ensure all communities are educated about HIV and that we actively seek to address the stigma experienced by those living with HIV.

“Knowing your HIV status is an important step in HIV prevention. The Rainbow Project can provide rapid HIV & syphilis testing for gay & bisexual men, men who have sex with men, transgender and non-binary people and anyone who is at risk of contracting HIV or is in high distress around their status. Free at-home sexual health testing is now available to everyone in Northern Ireland through the SH24 service. Sexual health testing has never been more accessible and this world aids day we would encourage everyone to get tested and know their status.

“Treatment of HIV has dramatically changed over the last 5 years and treatment is now available as a form of prevention. If f you’re HIV negative, you may be able to take pre-exposure prophylaxis (PrEP) to reduce your risk of contracting HIV. It can be used by people who are HIV-negative but at high risk of HIV to dramatically reduce their chance of contracting HIV. PrEP is highly effective and is free of charge via the NHS.

The Rainbow Project is campaigning for a government commitment towards zero new HIV diagnoses by 2030 through its Steps to Zero campaign.

Due to new approaches such as treatment as prevention, the efficacy of treatment such as anti-retroviral therapy, and our increased understanding of how and when HIV can be transmitted this target is entirely achievable, but it requires commitment and investment. We won’t just end HIV transmission by preventive treatment alone and must commit to easier access to HIV testing for all and comprehensive sex education.

“Steps to Zero also focuses on providing support to those individuals living with HIV, perhaps most importantly by helping to eradicate the stigma surrounding HIV. We all have a part to play in making HIV and HIV stigma a thing of the past. We’ve each got to educate ourselves on sexual health not just to be able to make informed choices to best protect ourselves but to stop perpetrating the same misinformation that creates fear and stigma of individuals living with HIV. ”

“Undetectable” means that the presence of HIV in a person’s body is so low that they cannot transmit the HIV to anyone by any means. This is achieved through a person living with HIV accessing anti-retroviral treatment

PEP is medication you can take up to 72 hours after you’ve had unprotected sex to dramatically reduce your risk of contracting HIV, it’s available at any A&E in Northern Ireland for free.

PrEP is medication you can take daily or on-demand (two pills before you have sex, a pill every day for 2 days after you’ve had sex) to eliminate your risk of contracting HIV altogether. You can get PrEP at any GUM clinic for those most at risk of HIV.

How you can support someone experiencing Whorephobia