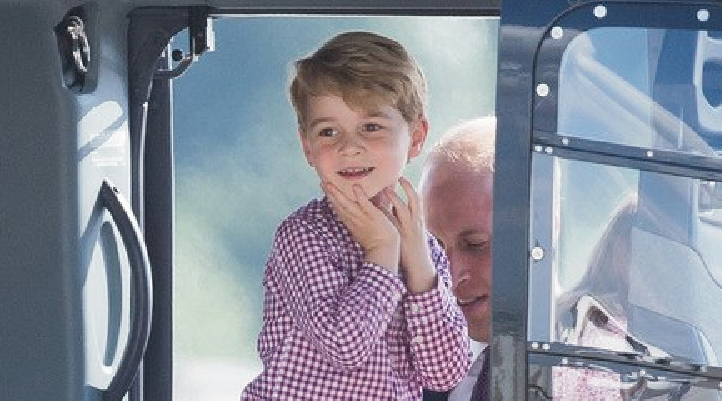 The TUV’s leader, and only MLA, Jim Allister snagged himself the front page of the Newsletter today. It’s not that hard to do; find a story with a gay angle, be outraged, Bingo!

Today’s outrage is caused by the reaction of some LGBT people, and particularly gay men, to a picture of Prince George. While on a recent visit to Germany with his parents, the prince was invited into the pilot’s seat of a helicopter and it’s safe to say that he looks pretty excited. The photo is a very cute depiction of a child expressing pure excitement and joy, with both hands brought up to his wide-open mouth, without a thought as to how others are perceiving his behaviour, and it is this lack of concern that brings a smile to many gay men.

A common experience for a lot of gay men, particularly during our childhood, is that how we expressed ourselves was regulated by other people. Many of us have memories of being corrected in how to ‘act like a boy.’ Whether its because of what we do with our hands, the way we laugh, how we are permitted to express happiness.

We live in a world which values masculinity and punishes anything which deviates from it.  Many gay men learn to regulate their own responses to things so that they can maintain a performance of masculinity and avoid the insults and violence which feminine men experience. That is why gay men appreciate this picture of Prince George; he hasn’t yet had his behaviour ‘corrected’ and that is a credit to his parents.

Louis Staples wrote an excellent piece for the New Statesman about this form of compulsory masculinity for men and boys and why it’s nice to see a child free of its pressures.

To be clear, I have no idea what Prince George’s sexual orientation is or will be. Neither have I seen commentary that assumes that he is or will be gay.

So why does this make Jim Allister so angry?

Jim got upset at a Pink News article which said that Prince George was now a ‘Gay Icon’ because of the picture. Perhaps a little excessive (in my opinion, the term is thrown about a bit too frequently) but nothing untoward. However it was enough to get Jim Allister the front page of a newspaper to send out dog whistle messages playing on the age-old lie that gay men prey on children. And the Newsletter was only too happy to facilitate him.

Let’s take a look at this doozy:

‘To take an image of a little boy and to fantasise of him being an icon for a life defined by sex is outrageous and sick.’

We see what you’re trying to do there, Jim.

There’s nothing new in equating gay men and those who sexually abuse children. It was a central plank in the Save Ulster from Sodomy Campaign, it was peddled during the debates around allowing same sex couples to adopt children and, of course, most famously, Iris Robinson, disgraced former DUP MP said: ‘I cannot think of anything more sickening than a child being abused. It is comparable to the act of homosexuality. I think they are all comparable. I feel totally repulsed by both.’

This lie of predatory gay men is used, not only to limit the legal equality of gay men, by legislating against their ability to parent, but also to stigmatise them out of certain professions and, ultimately, to justify homophobic violence against them.

Jim sees gay men appreciate a photo of a boy that reminds them of their own youth and instantly sees a threat. This is bias.

Gay men, and the wider LGBT community, are allowed to value the innocence of children before the world tries to tell them how to act, how to dress, how to talk. We are allowed to talk about how this picture reminds us of our own experiences of childhood and how we hope that younger generations don’t have to experience the same hardships as ourselves.

Over the past few years, many LGBT people have submitted pictures of themselves from their childhood to the Born This Way blog to show how they stood out from the crowd from an early age. Is there something so wrong in celebrating the fact that a prince can experience the same giggly excitement as the rest of us?

Gavin Boyd is the Policy and Advocacy Manager for The Rainbow Project.